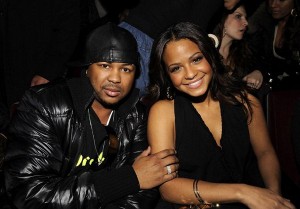 No, I’m not talking about another successful studio album. I’m referring to his divorce from singer/actress Christina Milian.

Already having carried baggage from a previous failed marriage with singer Nivea, the Atlanta native found himself back in love, this time with Milian, in which the two started dating in early 2009. After a few short months of amorous bliss, the two decided to become engaged in June 2009, and on September 4, 2009 The-Dream “put a ring on it” by wedding Milian. ‘Til death do us part, right?  Is this true for the rich and famous, or just a figment of their imagination? Well, I guess The-Dream wants to pull the attention from Lindsay Lohan and her lesbian lover. (This will certainly be a post this week. Stay tuned!)

After a few short months of what seemed like acted-out tracks from Dream’s 2007 release Love/Hate, Milian and Nash are filing for divorce. Apparently, while Milian was at home caring for their 5 mo. old daughter Violet, The-Dream felt obligated to take a vacation…but not without the help of his personal assistant, Melissa Santiago (emphasis on “person”). When photos surfaced of him frolicking on the beach, Milian decided she had had enough. The divorce was confirmed Tuesday, July 13, 2010. The clinical question that I have for Mr. Nash is, “Did you really intend to get caught?”  His answer would probably be “YES!”  Our role-models are certainly failing us in today’s trials of LOVE!

Although the couple recognized problems in their marriage, Milian, whose real name is Christina Flores, said that she ‘thought they were working on them’. Unlike Milian, The-Dream says otherwise; he even blames some of his deadbeat tendencies on her attachment to their child. Says Nash: “I don’t help out because my ‘helping out’ turns into expectations [so]…we got people [for that]”.

It seems as if The-Dream, in his rampant habit of hooking up, is afraid to be lonely, but never afraid to be a heartbreaker. Why is it that some people, no matter how disoriented their love lives are, decide to fall in love with new people?  At which point do you stop being addicted to falling in love and start making love work?

Dear Mr. Terius “The-Dream” Nash: You should rename yourself “The-Nightmare”. Your track record with women leaves me no hope for you as the “Love King”, but rather a “Love Jester”.

Now what I would like to know is, do you condone or support this behavior?  Leave me some comments so that I can help out my Atlanta  homeboy.