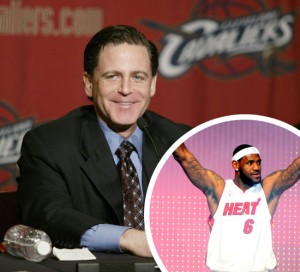 There is a lot of hype about NBA superstar LeBron James’ transition from the Cleveland Cavaliers to the Miami Heat. I don’t understand the negative buzz. After many failed attempts at an NBA Championship win, we all know that James wants a “ring”, and with his exceptional athletic skills, he righfully deserves one.

Here is the thing:
1. He has played with the Cleveland Cavaliers for seven years with no championship ring.
2. With multi-million dollar endorsements, James has branded himself as one of the top influential NBA players of this decade.
3. He is a devout family man who provides for his family, both monetarily and emotionally.
4. He is a morally sound athlete who has had no arrests or national scandals to date.
5. He is a philanthropist, devoting his time and his image to give back to the Boys and Girls Club.

Despite these qualities one would find in a star athlete, the issue for Cleveland, specifically for Cavaliers’ owner Dan Gilbert, is a matter of loyalty over destiny. In fact, Dan Gilbert’s unsettling issue with LeBron’s resignation prompted him to respond in a spiteful letter, masked as a consolation draft to mourning Clevelanders.

To see a copy of Dan Gilbert’s open letter, go to: http://www.nba.com/cavaliers/news/gilbert_letter_100708.html

In my opinion, your letter to LeBron was both inappropriate and outrageous. You don’t have the power to curse a Black man in pursuit of his dreams. Why is it that when a young, intellectual African-American man wants to move forward, his destiny is halted by the selfish desires of others?

Mr. Gilbert, I would write you a letter, but I am a Christian, and the words would not reflect my character as such.

To Mr. LeBron James:
You are a very special and very rare icon in our Black community. Do not allow the pressuring wants of others to weigh down the steps to your goals.

To Hell with Cleveland, Mr. James!

Capture your destiny! Continue to look up and reach for your dreams!

Now that you have heard my opinion regarding LeBron James’ move from Cleveland to Miami, how do you view James’ decision to relocate? How long do you stay in a place, or even a relationship that is basically stagnant and fruitless? Do you allow others control of your destiny for their personal gain? Finally, how long is too long to be trapped in that situation? Go to http://askdro.com/ to express your thoughts and opinions.