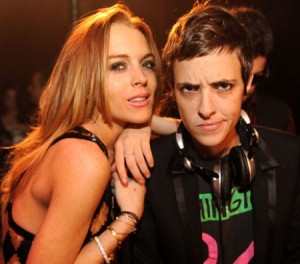 Once again, Lindsay Lohan is living proof that love has no bars…even though she’ll be seeing plenty of those in the jailhouse.

Fresh from a sentencing which will hand her 90 days in jail, Lohan has recently been seen around ex-girlfriend Samantha Ronson. After a rocky 16-month relationship which sparked in 2008, Ronson, a DJ, split from Lohan, even at one time calling her a “headache” and an “angry human being”. But MY, have the tables turned so quickly…

Lohan and Ronson  seem to have reconciled, and were recently reunited for a dinner date at a sushi bar. Reports even speculated that Ronson joined Lohan for a “nightcap” at Lohan’s West Hollywood condo, and stayed there until around 4am the following morning. Additionally, Ronson defended the actress/singer’s dignity after being e-heckled by Botox-ridden columnist Joan Rivers.

So, obviously, the countdown to Lohan’s incarceration is near; she is set to surrender to authorities on July 20. The fact that Lohan is attempting to “get it in” with Ronson as much as possible before her confinement is undeniable. Why is it that when we are in despair or in desperate times, we sometimes reach out to our former lovers for affection? Even more baffling, why do we sometimes seek the ones with whom we’ve had the most volatile, most tumultuous relationships?  And lastly, why, 9 times out of 10, they won’t say no?

Perhaps after having your lawyer quit on you,  the system give you a reality check, and a failed “F**k You” fingernail art ploy,  you may want to consider running to your lesbian lover too.

The bottom line is that Ms. Lohan really needs intense psychotherapy. The drugs, alcohol, jail and sexual promiscuity are all danger signs for this fallen star’s future. Lindsay has been crying out for help for several years now. I guess between Britney Spears’ rehabilitation and Mel Gibson’s decompensation, this actress may have a chance.

Now the new pitch with the old lover should be entered in with caution. She loves me, she loves me not…you know the whole gambit. I am sure once Lindsay gets to jail, there may be a lot more for her to choose from, baby! I like Ms. Lohan and I attempt, as a professional, to understand her pain. However, it just doesn’t work. Lindsay: get your self together and grow-up. Watch out old girlfriend!  Second times around usually end in failure, like the first if such was the case.

If you feel you are having relationship troubles, or have had problems with an abusive “back and forth” relationship, please visit:  Dr. Owens, M.D. Pre-Screen Mental Health Assessment