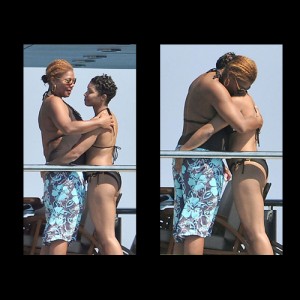 With an iconic hip-hop status and a decorated acting career, Queen Latifah has been dubbed a class act among countless Americans. From her aggressive, hardcore persona as “Cleo” in Set It Off to her hilarious “ghetto-fabulous” character of “Charlene” in Bringing Down The House, Latifah gracefully wins audiences the world over. She has pioneered avenues of entertainment in which many Blacks are unable to charter; she is a passionate and vivacious actress, earning her many accolades and awards, including a Golden Globe in 2008. Additionally, Latifah has a lucrative contract with Revlon, and has launched the successful “Queen Collection” as a face of Cover Girl cosmetics. So, with a plethora of achievements to marvel over, why then, is most of the Black population so focused on news of her recent sexual orientation? More so, why are some of the Black population even turning against her for having a female companion? Enough is Enough already. We must find something else to focus on in society.

Recently, Latifah, whose real name is Dana Owens, was spotted with suspected girlfriend and fitness guru Jeanette Jenkins in Saint-Jean-Cap-Ferrat, France aboard newlyweds Alicia Keys and Swizz Beatz’s yacht. Photos surfaced of the couple getting intimate, including a shot of the two groping each other. Soon after, the media buzz grew exponentially; even more surprising, some of Latifah’s fanbase and approval ratings decreased.

Question: Despite the positive influence that the Queen’s achievements have contributed to America, more specifically the Black population, why does it matter so much to us WHO she loves? More so, why are we turning our backs on her for who she loves and or who loves her?

In my opinion…WHO CARES?! This seems to be an issue plaguing Blacks in America: being able to accept one another as a whole, despite social and cultural differences. We are so imprisoned by peer pressure on so many different levels that we often times NEVER balance our thoughts. Yes, Queen Latifah may be a lesbian, but that’s just ONE dimension of this fabulous African-American woman. Why should all of her contributions be overlooked just because she loves a woman, instead of a man? Let’s stop hatin’ on her!

Do you feel that Queen Latifah’s character should be summed-up based on her sexual orientation?  If she were a male, like Will Smith or Kanye West, would you be more accepting of her alternative lifestyle? Do you have a son or daughter that is gay? Do you love him or her any less? Let me hear your thoughts on this “hot topic!”  Also, don’t forget to register to win in our Dr. Owens Giveaway! You still have a chance to win!

Also here at AskDrO.com we are declaring this “mental health awareness week.”   With this, we want YOU to go to our site and take the  Dr. Owens, Pre-Screen Mental Health Assessment and check your current mental health status. We are here for you!