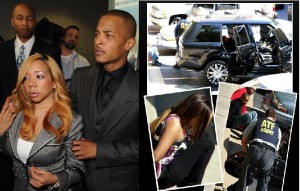 I sleep with my television on occasionally at night. Last night I had a nightmare. I dreamed that T.I (Clifford Harris) and his wife of approximately one month Tiny (Tameka Cottle), were arrested for drugs. What makes matters worse, their Maybach smelled like Marijuana and they were sipping from a styro-foam cup that allegedly had Sizzurp or what is known in the hip hop community as “Purple Drank.” (Codeine (cough syrup) and Promethazine) Now they had illicit and controlled substances, also in the car. Not marijuana or cocaine, but ectasy and metamphetamine. This is very serious. Just from a medical perspective, these drugs are addictive and deadly on the cardiovascular system.   Both of them may have to enter in to a drug rehab, if this has been going on for a while. Lindsey Lohan move over.

This just could not be so for the following reasons;

I know that this is folie a’ deux for the African-American community. The allegations are that illicit substances were in their car.  Usually, one would say innocent until proven guilty. However, when there is a rap sheet, the burden of proof falls the other way. Why would a self appointed role model find himself again in a conundrum. Also, drugging and driving could be a deadly mix. It has been said, by numerous racist, that you can’t teach Character, Class or Culture but enough already T.I.!   As a psychiatrist of color, I am pained by this latest issue.

Dynamic Formulation: It appears that many of the young stars, in our pop culture, have unresolved issues from their childhood. Their music is powerful because many of their listeners suffer from similar vulnerabilities as well as parallel character pathology.

Is T.I. in need of therapy from a psychiatrist? Should there be a hotline created for pop stars to call in times of  distress? Are you sick and tired of hearing the crap from the stars in the pop culture? Or Are you not really phased by these recurrent “bad”  behaviors? Let me hear from you….