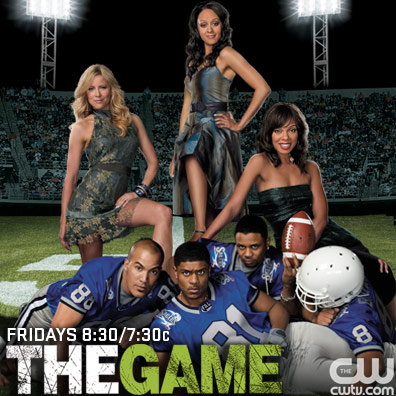 The GAME (BET) is back and starts out with a SIZZLE! Move over Real Housewives of Atlanta (BRAVO) this comedy-drama series actually has a plot.  I still love NeNe and Phaedra but the rest of the crew is a little dry and unengaging! Now this show, The GAME,  was created by Mara Brock Ali and produced by Kelsey Grammer.

Here is the scoop, the show was a spinoff of the successful series, Girlfriends. Do yall remember them?  Melanie the protagonist was the first cousin of Joan.  Joan wanted her cousin to pursue medicine and not a man. (just a quick refresher) Just know none of my med-school friends would have never made this choice.   Now the show did very well but CW changed its program format and subsequently cancelled the show.  BET, who has done well with the syndication of the GAME, announced last April that it would pick-up the series. (2 years later) Now the series is back, with all of its original characters, poducers and writers and just as much if not more- sizzle. Pop-culture here they come.

Issue I🙁 The Paternity Issue) Here it is, Dr. Barnett-Davis you needed to deal with your insecurities concerning the “Baby Moma Drama.” Since  this is NOT his child the necessary financial adjustments have to be made. God knows we all knew that the child was not his!  If you did not tell him you could have ended-up in a future “Double Jeopardy” situation. You did good girl telling him.  Malik get over it and move-on.  You can still provide for T.J. but the baby needs to know the identity of his biological father. We all need to know the true identity of our fathers. However, I applaud you for confronting the mother-of-the-baby earlier and not later. (I really like these writers)

Issue II🙁 Malik’s BAD Behavior) Malik how can you be openly seen in public with the manager’s wife. Are you crazy!  You may think that the rules don’t apply to you but they will just wait and see. Also Malik,  pay for that man’s sink you broke. You are a fool and do you trully represent the behavior of African-American athletes here in America?   T.T. just move on an cancel your interactions with this guy. Never send your girlfriend with a fool T.T. Just forget about Allison and move on. You will get over the  hurt.

Issue III: (Fight-Girls-Fight)I need to see the fight between Tasha Mack (Crazier than Hell) and Kelly Pitts (White Girl Gone Wild).   This one is bound to brew and sizzle this series.

Issue IV: (The Divorce) The inter-racial thing will be a very good story line.  However, how weak will the writers let Jason be in this series.  Kelly is going to try to break him but I am hoping they will allow him some strength and fight. Kelly is actually smarter than I thought. She gave Melanie some pretty good advice. However, Kelly Jason got one up on you! And yes Kelly,  Jason is the show when it comes to you.

Issue V: (Robbing the Cradle) Tasha Mack you are “going straight to jail.”   Remember what is done in the dark, soon comes to light. Let him meet your son, what’s  the problem. Let the “cat out of the bag!”  Tasha please be advised that you are with a whore.(Dante)  Yes, Dante is playing you for his “freaky old lady” tricks.

Now I personally love the fact that the protogonist is a physician who is NOT practicing. Way to Go Dr.Barnett. Moreover with President Obama’s healthcare plan, I am sure that many more of us will be joining you on the sideline. This was a very good series premiere and I am sure that we all will join and push those ratings.  Afterall, we are a part of the majic that BET needs to survive. NOW DID those writers leave us with a cliff-hanger and ethicall dilemma! I can not wait to see what happens with this one………………Right On and Good Job Keep Us Salivating!

How did you lke the “Series Premiere?”  Will you be tuning in next week?  Where you satisfied with the different story lines? Did the writers re-light a fire in your attendance back to BET? Let DrO hear from you on the GAME!