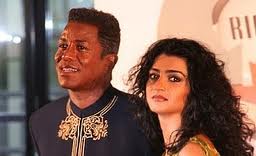 There is now a battle with Alejandro Jackson, who was married to both Randy Jackson and Jermaine Jackson, and the Michael Jackson Estate. (Katherine Jackson) For those of you who don’t know, Michael’s Jackson’s mom is no joke and a very powerful woman. Mrs Jackson wants Alejandro out of the home in Encino. (part of the Michael’s  estate) Alejandro is no dummy so she has  retained a lawyer in this battle.

This all came about after Katherine had to move to the family compound in Encino while her home is being renovated.  Here is the thing, Jaafar (Jermaine’s son) ordered a stunt gun to the home and this triggered an investigation by LAPD.  Now this is a very complicated blog post and I will have to give you a little bit of the Jackson Family Dynasty History.

So now the battle is on! Alejandro will not leave and she is about to expose a lot of the Jackson family secrets.  It will be very interesting to see what happens in litigation. Will they settle out of court?  Will Alejandro yield to the pressures of the Jackson Family’s Matriarch? Will Randy and or Jermaine try talking to their ex-wife? Will Alejandro, at least temporarily leave in the condo to keep down confusion?