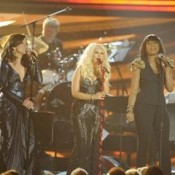 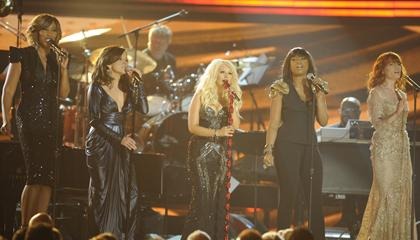 In the above clip someone is missing??? …. Who apparently felt they should have been a part of this tribute to Aretha Franklin.  Yes, no one other than The American Idol Princess herself, Fantasia Barino. Instead, Christina Aguilera, Yolanda Adams, Jennifer Hudson, Florence from Florence and the Machine and Martina McBride participated in the tribute.

Aretha Franklin stated: “I was sorry to hear that Fantasia was upset because she did not get the opportunity to participate in my Grammy Tribute this year,”

Many people, including Aretha Franklin, feel Fantasia is still a young artist.  It is important that Fantasia understands that she will not always get the leading part or be able to participate in everything. It is apparent that she needs to mature, not only as individual, but also as an artist in the industry. In the past, Fantasia participated in both Aretha’s Music Cares Person of the Year Tribute and her United Negro College Fund Tribute.

In her absence Fantasia was nominated for 11 Grammys and won the award for “Bittersweet,” a track off her latest album, “Back To Me” for Best Female Vocal Performance.

Overall Fantasia felt left out… as she clearly stated: “They were honoring someone who is my idol, Aretha Franklin, and there is no way I could have sat there and not got the happy feet and wanting to jump on the mic because she is my favorite,” she explained. “So I felt like, you know, at the end of the day I should have been on that stage so, I kind of did my own little thing last night.”

However, the Queen of SOULLLL….Miss Aretha Franklin took the time to respond to Fantasia’s concerns via the USATODAY:

“I was sorry to hear that Fantasia was upset because she did not get the opportunity to participate in my Grammy Tribute this year. I recall in the past, Fantasia participated in both my MusicCares Person of the Year Tribute and my United Negro College Fund Tribute. Fantasia is still young in the business and although we all love and appreciate her she must understand that in this business of show business she will not always get to participate in everything she would like [to] participated in. I’m sure it was not an intentional omission. I will see Fantasia over the summer here in Detroit.”

Do you think the Queen of Soul was sincere in her response?

Did Fantasia deserve to be in the tribute?