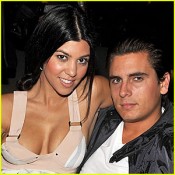 The Kardashians have certainly made a name for themselves through their string of reality television shows on the E! Channel; but these espresso-drinking, tressed beauties have a little competition.  Scott Disick, long-time boyfriend of Kourtney Kardashian, is stealing some spotlight of his own with his out-of-control antics. Since the season opener, Scott and Kourtney have been on the rocks; from allegations of cheating, binge drinking, and destructive behavior this pair has had one tumultuous past. Let’s not neglect the fact that the entire Jenner family despises his very existence including both Kim and Khloe, with Kris Jenner leading the pack.  Both Kris and Scott avoid as much contact as possible with each other because when the drama hits the fan, Kris’ maternal instinct takes brute force and the two go toe-to-toe.

What amazes me is the length of time that Kourtney and Scott have been in this turbulent and disorderly relationship. Since the show’s conception Kourtney was suspicious of his cheating ways and found multiple pieces of proof of his infidelity. Not to say that Kourtney would be the first to go back to a man after he has cheated, but that was just the beginning. As seasons have progressed, he’s been caught cheating on a couple of occasions and has since inherited a drinking problem.  You may recall in Season 2 of “Kourtney and Khloe Take Miami” (A “Keeping Up with the Kardashians” Spinoff) that after a six month separation, Scott and Kourtney got back together and she ended up getting pregnant. Months into her pregnancy, Scott trashed an expensive hotel suite during a business trip for the Kardashians, crashed their business dinner, harassed the waiter (stuffed a $100 bill down his throat) and made belligerent remarks in front of their business representative.  This is just small portion of the antics that Disick has put their Kardashian family through.

Despite much animosity between Disick and the Kardashian family, Kourtney has supported Scott and maintained their relationship. It is an obviously unhealthy relationship; Kourtney has conditioned herself to feel as if she needs Scott’s companionship. After such a long period of time she believes that she has to remain with him for the baby, his health, their family and umpteen other reasons that have no relevance! Many women begin to  adopt their belief that they have to be the savior to an obviously corrupted man who doesn’t want to save himself. People change when they themselves want to change, not because someone is asking them repeatedly or threatening them to do so. Kourtney’s constant return to his side aids Scott’s belief that no matter what his actions are, he simply needs to find out what he has to do to get her back. Time and time again, he’s proven his theory right. There has been an improvement to his behavior. All the way until this current season of “Kourtney and Kim Take New York” it’s previewed that Scott gets into a substantial brawl with club owners and makes a complete mockery of the family. This is clearly a never ending cycle that needs to end sooner than later.