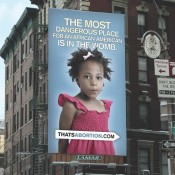 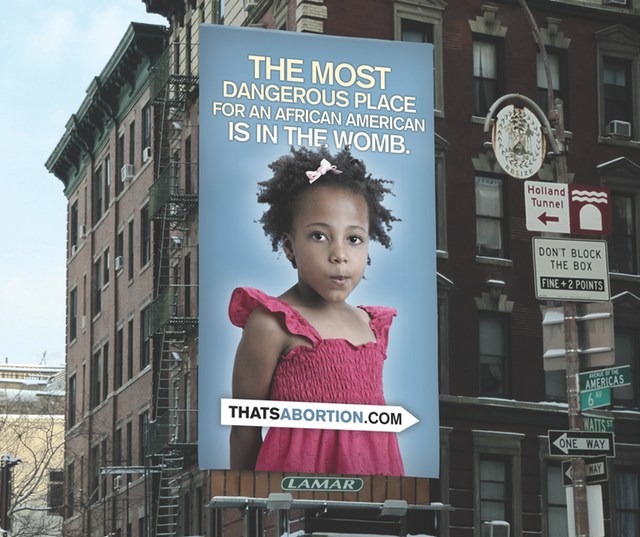 Well apparently the WOMB is the most dangerous place for an African American child.

“During Black History Month, we celebrate our history, but our future is in jeopardy as a genocidal plot is carried out through abortion,” said Life Always Board Member Pastor Stephen Broden

According to NBC New York:

The anti-abortion nonprofit organization behind the billboard said its goal is to shock people and spark discussion. The spokesperson for Life Always, Marissa Gabrysch, said the group is trying to highlight its belief that Planned Parenthood targets minority neighborhoods with the 300,000 abortions it performs each year.

“There’s a grave disparity and just a huge disproportion that African-Americans represent 13 percent of the U.S. population yet represent 36 percent of abortions in the United States,” said Gabrysch.

Planned Parenthood issued the following statement in response to the billboard: “These billboards are offensive and disturbing. The creators are using divisive messaging around race to restrict access to medical care,” said Roger Rathman, spokesperson for Planned Parenthood NYC.

“To refer to a woman’s legal right to an abortion as a ‘genocidal plot’ is not only absurd but it is offensive to women and to communities of color,” Quinn said in a statement. “Every woman deserves the right to make health care decisions for herself and I will continue to fight to protect this basic right and against this sort of fear mongering.”

“Offensive rhetoric and deceptive actions against a woman’s right to choose will not be tolerated in our city.”

Similar billboards have been displayed in Jacksonville, Fla. and Austin, Texas last year by another anti-abortion organization called Heroic Media. Life Always took over Heroic’s national campaign in January. The billboard in Soho will remain in place for three weeks. It is the first one to be put up in the tri-state area.

Whoa. First of all this ad is an eyesore and should be OFFENSIVE to anyone who views it on the street. This group is clearly trying to gain publicity and ignite tempers with this method of messaging. I think that the ad unfairly targets black women and children which is counter-productive to their message. Using African American History Month as a catalyst for this billboard is just WRONG. Let’s not take a positive movement and use it for negativity!

Also, viewing that gigantic billboard will only add to the shame and secrecy surrounding abortions. We need to create open dialogue about the issue, that allows voices to be heard from both sides. Fear mongering is not going to solve anything. African American women have a right to choose, just as any other.

How would you feel if you saw that billboard in your community?

Do you agree with the group’s message?

How should Planned Parenthood respond?

Why are African American women always being exploited  for publicity?

The billboard, paid for by the anti-abortion group Life Always was pulled down Thursday night by the Lamar Advertising Company.

The shocking billboard blind-sided New Jersey mom Tricia Fraser, who was furious that her 6-year-old daughter, Anissa, was featured in the anti-abortion group Life Always’s ad.

“I want an apology. I’m happy that it’s [being taken down], but at the same time I’m concerned that they can use that image again. I was devastated that they portrayed her like that.” 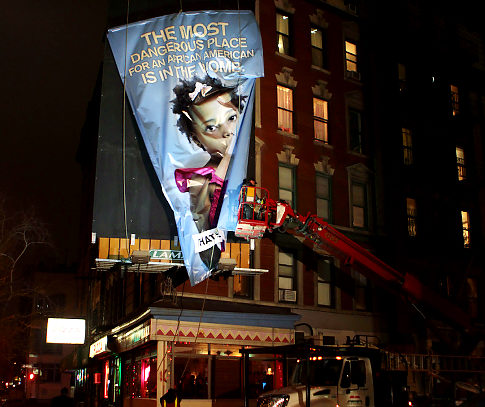