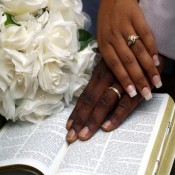 Question of the Day:

I’m not sure if I should change my name when I get married?

What’s in a name? Not much apparently if we stick to the “American way”.  As tradition would have it, a woman’s last name will fall by the waste side only to enter the category “maiden name”.  Or, in other words, no longer relevant.  Now, if you’re one of the lucky women who shares your last name with a brother, then no fear!  He will carry on the family legacy.

According to a 2009 study at Indiana University, only 30% of Americans do not believe women should have to take their husbands last name. The other 70% of Americans seem to think that the name-change is only “natural”.

Laura Hamilton, a researcher in this study, shared that people seem to think that males are the more dominate gender in all aspects of life.

“One of the most interesting things is that a lot of people assume that because language in general is gender-neutral, that name change would also be one of those things in which attitudes would be shifting towards being much more liberal,”

So, is this a harmless American tradition?  Or is this sending a message of irrelevance?

You be the judge…and for all you unmarried women out there, THINK before you say “I do!”