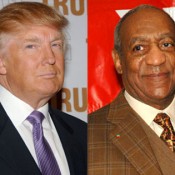 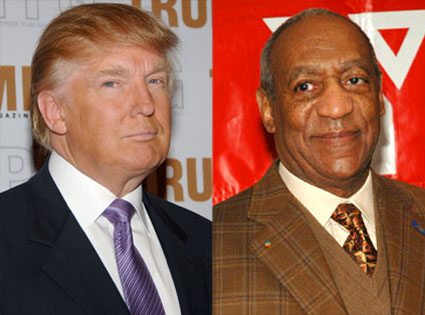 Trump Releases Statement After Cosby’s Comments On “The View”

These two grumpy old men are cat-fighting like a pair of women! Now, Bill Cosby has been known to go off on rants, but this particular appearance on “The View” was just a tad bit…well see for yourself. Now we know how black people feel about Obama but the nasty expression on Cosby’s face was just….SCARY!

Apparently the Donald caught wind of this appearance and issued a SCATHING statement to Cosby…telling him exactly how he feels!

“The other day on The Today Show, right after I was interviewed by Meredith Vieira, a terrific person and reporter, I happened to watch Bill Cosby who was on at the end of the show. While I have never been a fan of Cosby’s, I had always assumed he liked or respected me because every time I met him—the last time at the David Letterman show where I preceded him as a guest—he was always so nice, saying “let’s get together”—asking me out to dinner, and being polite to the point of offering to buy me a suit because he has a “great tailor.”

In any event, as I watched the show, the subject of Donald Trump came up.  I was surprised to hear him blabber, somewhat incoherently “you run or shut up.” The hatred was pouring out of his eyes when he said this. As I am sure he must know I cannot run until this season of Celebrity Apprentice ends. I know that he has taken a lot of heat over the years  in that he seems to be talking down to the people he’s talking to and purportedly trying to help. Actually, based on the way he acted, things are not looking too good for Cosby.

I wish he would be more honest, and if he doesn’t want me to run because he’s obviously an Obama fan, he should state the reasons and not come into my “green room” in front of numerous witnesses and treat me like his best friend, only to denigrate me when I’m not around. Sadly, he got more attention talking about me than he did on the merits of his own appearance—maybe he is not as dumb as I thought.”

Seems that Trump is trying to insinuate that Cosby is a little off and I think that this will only get worse. However, I’m sure that if Donald Trump is seriously trying to run for President, he has other things to worry about…but then again is he SERIOUS?