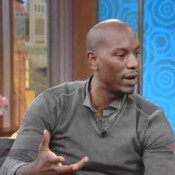 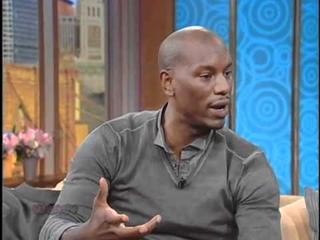 Tyrese hit up the couch on “The Wendy Williams Show” to promote his new book, “Get Out of Your Own Way.” Although it’s nice to see the singer trying to explore other avenues, I’m a little concerned about his views on cheating.

When Wendy Williams asked, “Why do men cheat?” This is how Tyrese responded:

“I don’t have all the answers, but I can say that most mothers raised their daughters to believe that if you cook, clean, thoroughly take care of your man and go all out for your man, that should keep him home. Unfortunately that’s not the truth, but I will say to my daughter when she gets old and starts dating is, if you end up being cheated on, don’t own the cheat. Don’t make the cheat yours. It’s something in that skirt and those legs and whatever the case may be, and [he] decided to dip off. Does he see the value in his woman at home? Yes, but if he ends up dipping off, that spaghetti couldn’t keep him at home.”

He also had a blatant reply if his wife ever cheated on him:

“No way. See, it’s expected of men to cheat, even though all men don’t cheat. I can’t just generalize and say all men cheat, but it’s expected because it’s a part of our upbringing[…]no listen if your in high school or in college, if one dude has sex with ten different women he is a hero, he’s the champion of the campus. If one woman has sex with ten different guys, they’re all kind of things in the book right?[…]Its just a part of what instilled in us growing up.”

Watch the interview footage below.

Now brother you know you’ve stirred up a whole bunch of TROUBLE with this interview! I’m not sure he’s totally wrong about his views either. When was the last time you heard a woman getting praise for conquering the star forward on the NCAA team? We however have said nothing of the black MALE megastars actively pursuing Skylar Diggins. Something to think about.