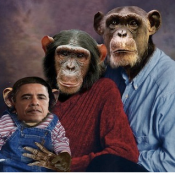 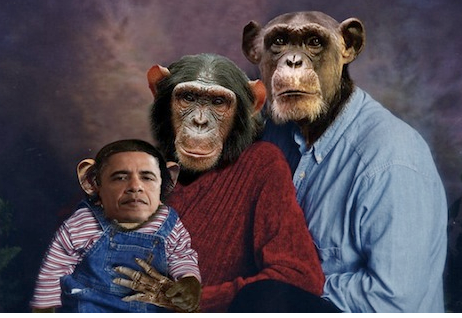 What kills me is that do these people honestly think in this day and age your scandals won’t get out? Wake up and smell the COFFEE!

The above photo was sent out in an email with the caption, “Now you know why — No birth certificate!” by Marilyn Davenport a Tea Party activist and member of the Orange County Republican Party’s central committee.

Republican Party of Orange County Chairman Scott Baugh wants to launch an ethics investigation about the incident, and that he thinks she should resign. Baugh said, “It’s just highly inappropriate, it’s a despicable message, it drips with racism and I think she should step down from the committee.”

However, Davenport did not in any way think that the email was racist.

“Oh, come on! Everybody who knows me knows that I am not a racist. It was a joke. I have friends who are black. Besides, I only sent it to a few people–mostly people I didn’t think would be upset by it.”

Why is that whenever someone makes a racist or homophobic comment, they always follow it up with a half-hearted apology about having “black” or “gay” friends? I’m sick of people just thinking that they can say or do whatever without suffering the consequences for it! What makes this situation even worse… is the fact that it isn’t the FIRST time Davenport has been in hot water over racially sensitive matters.

The first was during President Obama’s inauguration, when Los Alamitos Mayor Dean Grose forwarded an email depicting a watermelon patch on the White House lawn to several people. According to Schroeder, Davenport defended Grose amidst calls for his resignation.

Schroeder also says that Davenport defended Newport Councilman Richard Nichols when he opposed installing grassy areas at a beach. His reason, according to the L.A. Times: “with grass we usually get Mexicans coming in there early in the morning and they claim it as theirs, and it becomes their personal, private grounds all day.”

I want to hear from you on this readers.

Do you think that Davenport should resign? Why are so many political opponents to President Obama getting caught up in race issues? Are we really living post-racial…here today in America?