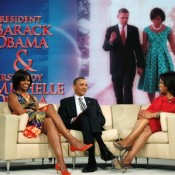 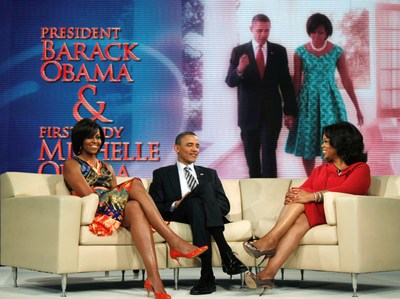 Oprah Asks President Obama About The Release of His Birth Certificate

A few hours after President Barack Obama spoke to the American public with a national press conference, he joined his wife First Lady Michelle Obama to  tape their May 2nd appearance on the “Oprah Winfrey Show”

Oprah booked the First Couple as part of her march towards the May 25th finale of her long-running daytime talk show. She also recently confirmed that author James Frey, who famously had the veracity of his supposed memoir “A Million Little Pieces” questioned by Oprah a few years back, would be returning to the show during the final weeks.

Naturally, the subject of the President’s recent birth certificate debacle came up during the taping. An exasperated Mrs. Obama threw her hands in the air and exclaimed, “He was born here!” before the President himself made light of the situation.

President Obama went on to admit he was surprised and confused by all the attention being paid to his birth, when the country faced serious deficit issues. He claimed that the “serious decisions” the country has to make regarding its future were being overwhelmed by nonsense.

The full episode will air Monday, May 2nd.