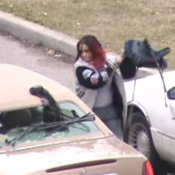 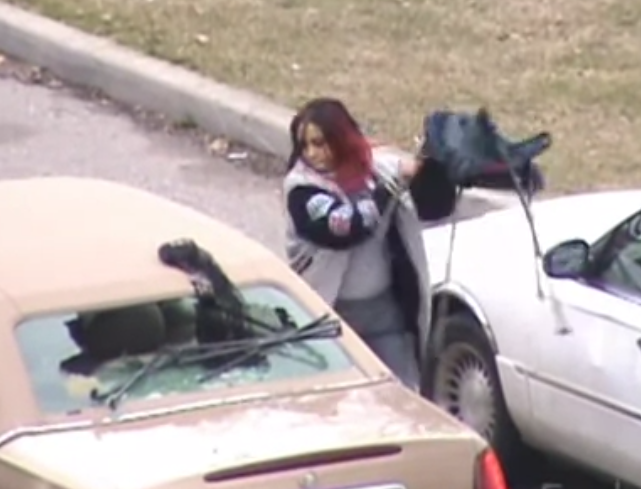 Men beware this is a REAL situation! Be careful when you make your girlfriend mad in the presence of your vehicle! One woman took Jazmin Sullivan’s popular song “Bust Your Windows” and brought it to life!

It all happened Saturday in Detroit’s Palmer Park area. The video shows a woman identified as 27-year-old Latonya Dawson yelling at her boyfriend as he walks away.

When police officers leave the scene, Dawson can be seen getting out of her car, going to her trunk and pulling out a folding lawn chair.

“The woman was outside banging the car windows with a chair,” the aforementioned woman said.

“She left and she came back with what appeared to be a crowbar, some kind of tire iron or something and banged the car up.”

Neighbors say this video only tells part of the story. After destroying the car, neighbors say Dawson took off going the wrong way up Woodward.

“Her car (spun) out and stalled and that was when someone called the police and said if you come now you can get her,” said the woman.

That’s when police arrested her.

A local lawyer uploaded video of the scene on YouTube and added Jazmine Sullivan’s hit song “Bust Your Windows” as a soundtrack. Within just a matter of days, the video has had nearly 30,000 hits.

Detroiters say a lot more than a car was damaged.

“It is actually posted on Facebook and a member of my church was like, ‘Wow, this only happens in Detroit,”‘ another woman told FOX 2.

A serious blow for a community that’s trying to stage a comeback.

We spotted Dawson’s banged up car parked outside her apartment, but she never came to the door.

Bottom line, the women with whom we spoke want you to know one thing.

“It’s not only in Detroit. It’s everywhere wherever ignorance is going to be, and clearly that was an ignorant move and not somebody that was educated,” the second woman said.

“If you feel yourself going off or going nuts, you need to take a moment and try to calm yourself down before your react,” the first woman said.

Dawson will not just be walking away from what she’s accused of doing. She’s been charged with malicious destruction of personal property and domestic violence.

Talk about ANGER issues! Now ladies and gentleman this is what NOT to do, when your significant other makes you mad. Learn how to control your emotions and keep them in check. I’m sure she regrets pulling out that lawn chair and not taking a moment to breathe. Temporary satisfaction is not worth long-term turmoil!

What do you think about this situation? Have you ever “blown” up at your boo? Tell me about it!