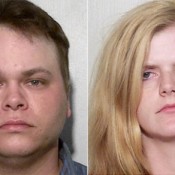 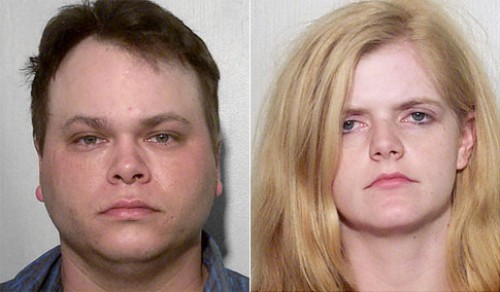 Brian and Shannon Gore are awaiting trial for the attempted murder of the 5- or 6-year-old girl as well as murder, after police found the body of another child buried on their property a day after discovering the severely malnourished girl.

The couple were arrested Thursday, when police knocking on doors during a robbery investigation stumbled upon the caged little girl, naked and covered in feces and bed sores.

Cops returned Friday and after searching a shack near the couple’s trailer home, unearthed the remains of a small child. Police have yet to confirm that child’s age, sex or cause of death.

In addition to the caged girl, whose age police estimate at 5 or 6, police removed a healthy 2-month-old infant. Both children were placed in protective custody.

The caged girl, whom the Gores told police was only 2-years-old, was extremely malnourished and according to Brian Gore, 29, was fed a single Pop-Tart in the morning and another Pop-Tart or sandwich at night, said Maj. Darrell Warren of the Gloucester County Sheriff’s Office.

She was so hungry her bones were visible and she ate her own flaking dried skin, Warren confirmed.

This is seriously a disgusting case! I hope that these parents are locked up and forced to be treated in the same manner that they did this baby. Some people do not deserve to be parents. SMH. I hope that these children are able to find love in another family situation.

What do you think should happen to the Gores?