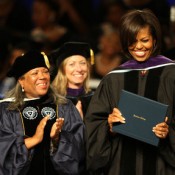 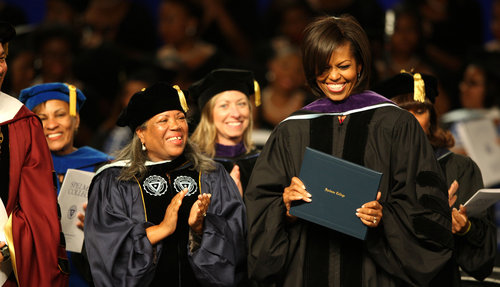 The graduates swelled with pride upon her arrival, even as she clapped enthusiastically for their achievements. In Obama, the young women see the essence of the successful, black career women many of them hope to become. But her message to the Class of 2011 of service to others and helping the underserved also reflected her roles as first lady and a major campaigner for her husband.

Obama delivered four commencement addresses this season, and her choices were politically strategic as the president gears up for the 2012 campaign for a second term. She was in Iowa last week and in coming weeks will speak to graduating seniors at Quantico Middle High School in Virginia, to graduates whose parents serve at the Quantico Marine Base.

“Find those folks who have so much potential but so little opportunity and do for them what Spelman has done for you,” Obama said. “No matter where you go in the world, you will find folks who have been discounted or dismissed, but who have every bit as much promise as you have. They just haven’t had the chance to fulfill it. It is your obligation to bring Spelman to those folks. Be as ambitious for them as Spelman has been for you.”

Most of the crowd were predictably mothers, grandmothers, aunts, sisters, or female cousins – all filling the 10,000-seat exhibit hall to see the first lady.

Her appearance at Spelman’s ceremony was a coup for the 130-year-old college, which competed with institutions across the country for her to appear as commencement speaker, lobbying her on YouTube, in petitions and letters. Spelman also conferred an honorary doctorate of laws degree on Obama, who earned her juris doctorate from Harvard Law School.

Award winning artists and sisters Phylicia Rashad and Debbie Allen also marched in with the class of 2011, as both received Honorary Doctorates.

Congratulations to all the new graduates! My niece will be attending Spelman college in the fall and as a Morehouse man, I can’t wait for her to establish and continue with the great legacy of this prestigious institution.