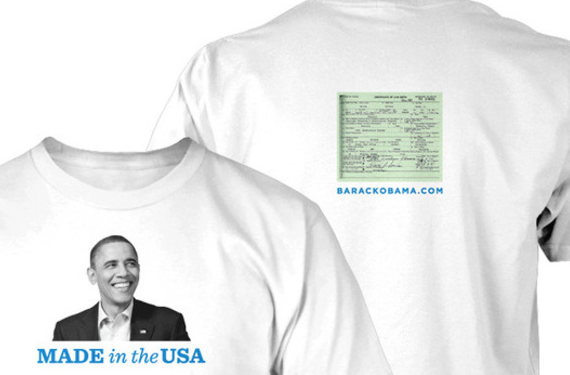 Obama’s Birth Certificate Will Be Featured On T-Shirts & Mugs

After all the HYPE surrounding President Barack Obama’s birth certificate his campaign has decided to make a profit out of the hoopla.

The Obama campaign is selling T-shirts on its website that show Obama’s face on the front along with the words “Made in the USA.”

On the back is an image of the president’s long-form birth certificate from Hawaii – the one the White House finally produced in April in an attempt to squelch the “birthers” who claim Obama is not a natural-born U.S. citizen, and therefore ineligible to be president.

The campaign advertised the T-shirts Wednesday, along with birth certificate mugs, in an email to supporters describing a new book by birther Jerome Corsi, a longtime Obama attacker. Corsi has a new publication out titled “Where’s the Birth Certificate?” in which he makes false claims about Obama’s purported ineligibility for the presidency.

In the email Obama deputy campaign manager Julianna Smoot writes, “There’s really no way to make this stuff completely go away. The only thing we can do is laugh at it – and make sure as many other people as possible are in on the joke.”

“If the facts can’t make these ridiculous smears go away, we can at least have a little fun with it,” she writes.

Will you be purchasing some of President Obama’s merchandise?