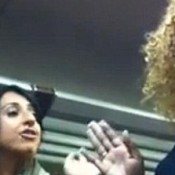 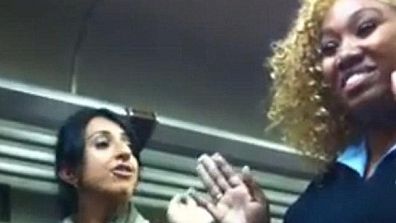 To most people private conversations are done in private. But one New Yorker became irate when told to please calm down and lower her voice while having a private conversation on her cell phone on the Metro North train line. Little did she know, a fellow passenger recorded the unpleasant ride.

After being politely asked to stop dropping the f-bomb and quiet down the woman said that she was too well educated to be told to do so.

“Do you know what schools I’ve been too? How well educated I am? I’m sorry, do you think I am a little hoodlum?”

Well ma’am, just because you are educated does not mean you have manners. She even admits that she is having a private conversation with her friend, neglecting to realize that she is not in public. Just because cell phones allow the ability to talk when and wherever you want, does not mean that you should.

After the yelling subsided the conductor of the train came onto the loudspeaker, “This is a reminder to keep private conversations quiet, especially those who graduated from Harvard, Yale, or are from Westport.”

*An earlier 2-minute YouTube video of the exchange had over 350,000 views, before it was removed.

This woman’s ELITIST attitude was certainly uncalled for, in my humble opinion. She was clearly disturbing the peace and I’m sure they didn’t teach her that at NYU.

What do you think of her subway rant?