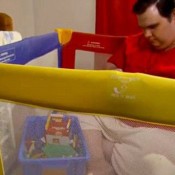 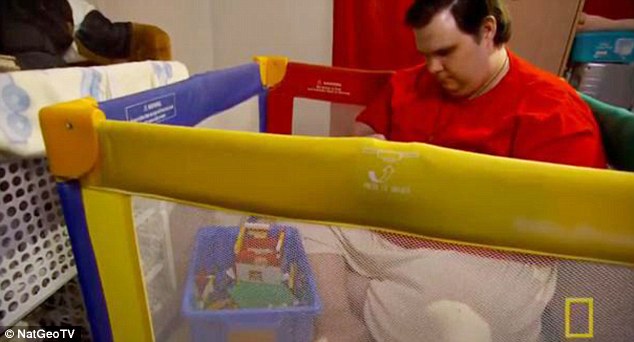 Remember the 29-Year-Old adult baby I told you about awhile back…the one who sleeps in a crib, drinks from a bottle and wears diapers? Well apparently Stanley Thorton has been a naughty boy.

Republican Senator Tom Coburn of Oklahoma thinks that the adult baby should be able to hold down a job.

Coburn believes Thornton has demonstrated an ability to support himself through his work on an online adult baby support group, www.bedwettingabdl.com, which he launched in 2000. Thornton also demonstrated carpentry skills on the National Geographic program on which he’s shown building giant-size baby furniture.

Coburn is also suspicious of Thornton’s roommate, Miss Dias, a former nurse who acts as Thornton’s “mother,” who is collecting Social Security benefits. Coburn points out that she’s capable of caring for an adult baby.

In a letter to Inspector General Patrick O’Carroll, Coburn wrote,

“Given that Mr. Thornton is able to determine what is appropriate attire and actions in public, drive himself to complete errands, design and custom make baby furniture to support a 350-pound adult and run an Internet support group, it is possible that he has been improperly collecting disability benefits for a period of time.”

“The request comes at a time when members of Congress are struggling to cut budgets and weed out waste to try to bring down the staggering deficit, and comes just days after Social Security’s trustees released a grim assessment of the program’s long-term financial health,” according to the Washington Times.

In response to Coburn’s attack, Thornton wrote a letter to the Washington Times threatening to commit suicide if his social security benefits are canceled:

“You wanna test how damn serious I am about leaving this world, screw with my check that pays for this apartment and food. Try it. See how serious I am. I don’t care. I have no problem killing myself. Take away the last thing keeping me here, and see what happens. Next time you see me on the news, it will be me in a body bag.”

Thornton has also said that the National Geographic show overstated his woodworking skills.

It’s never okay to threaten your life people, especially as an outright tantrum for misbehaving. Seems he’s trying to use scare tactics so that he can keep living his cushy life.

Clearly Mr. Thorton needs to get his story straight and figure out exactly why he’s on disability.

You need more people, we just don’t believe you!

Do you think that the adult baby is trying to get over on his benefits?