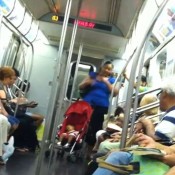 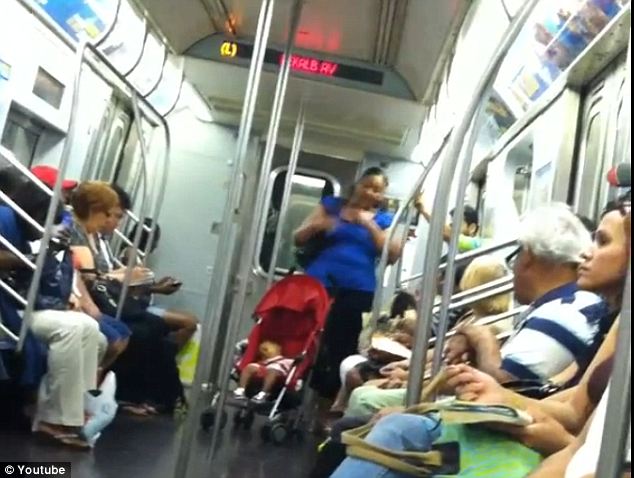 Two women get into a vicious fight on a New York City subway and one of the women lost her child as the baby’s stroller rolled out onto the subway platform.

What appears to begin as an argument over a seat quickly escalates into a vicious fight, with one woman losing her baby as the stroller rolls off the train onto the platform as she tries to fend off her opponent.

The mother even appears to spray mace into the face of the other, sparking her into a furious rage.

As onlookers flee, the pair exchange blow after blow, tearing at each others hair and clothes as they swear and grapple on an L train.

As the pair continue to fight, passengers can be heard shouting ‘take care of the baby’ before one woman steps forward to take hold of the abandoned pram.

The pair are eventually separated by onlookers and the woman in blue takes her child and leaves. 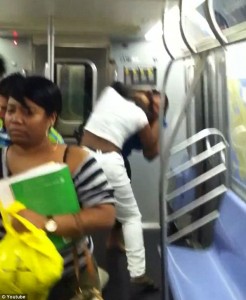 But despite a sizeable crowd standing in her way, the woman in white tries to get off and continue the fight.

Afterwards the woman in white can be seen holding what looks like a hair piece lost during the fight, as she shouts that the woman ‘maced’ her.

When contacted, New York Police said they were unaware of the incident but were looking into the video.

Due to the graphic language in the video I’ve decided not to post the video.

You can watch the video here:

Do you think the woman with the child should be charged with child neglect or endangerment?