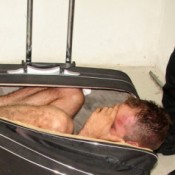 Police say a woman was caught trying to sneak her common-law-husband out of a Mexican prison in a suitcase following a conjugal visit.

A spokesman for police in the Caribbean state of Quintana Roo says staff at the prison in Chetumal noticed that the woman seemed nervous and was pulling a black, wheeled suitcase that looked bulky.

Ramirez is serving a 20-year sentence for a 2007 conviction for illegal weapons possession.

Arjona was arrested and charges are pending.

Talk about LOVE…I wonder if they’ll take away his conjugal visits now?