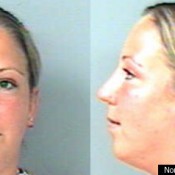 Woman Was Angry At The Child For Looking At Her Boyfriend

Candice Wiley, 24, is a woman who does not want ANYONE looking at her boyfriend; even if that person is a 12-year-old girl.

Law enforcement officials say Kiley lashed out at the 12-year-old during a family birthday party on July 23, according to NorthBranfordPatch.

The suspect’s boyfriend was in the kitchen cleaning up a spill when Kiley allegedly claimed the child had “been looking at him all day,” police told the website.

Kiley then grabbed the girl by her hair and hurled her to the floor, investigators allege.

“She landed flat on her back, hitting the back of head on the floor,” North Branford Police Department Lt. David D’Ancicco told The Register Citizen.

“Everybody immediately came to the 12-year-old’s aid,” he noted.

Family members broke up the fight, which left the child with a bump on her head.

The victim, who is reportedly a friend of the suspect’s younger sister, also suffered an asthma attack.

Kiley had left the home by the time police arrived. Officers took the suspect into custody on Aug. 9 after a warrant was issued.

Kiley has been charged with third-degree assault, disorderly conduct as well as risk of injury to a minor. She is due in court on Aug. 23.

Calls to the North Branford Police Department were returned by deadline.

Did this woman take her jealous streak too far?