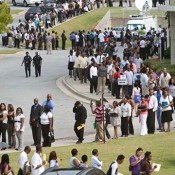 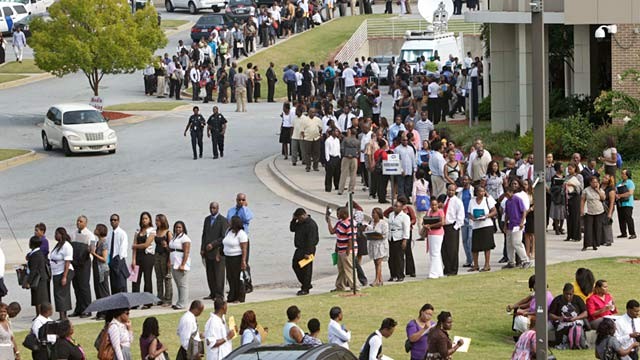 The Congressional Black Caucus turned out thousand’s of people in Atlanta’s sweltering heat for their “For The People” job fair on Thursday.

People competed for the chance to win a job with one of 90 featured employer’s who had about 2,000 job opportunities.

“We plan to listen to the people who came to today’s job fair and try to address their concerns,” said Congressman John Lewis, the co-host of Thursday’s event with fellow Georgia Rep. Hank Johnson.

The “For the People” Jobs Initiative is a five-city tour, and launched in Cleveland, Ohio August 8th. The Atlanta job fair featured help finding work with the federal government, GI Bill and veterans’ job training, help for job seekers over age 55, and advice on interviewing, along with offering direct contact with potential employers.

The tour is intended to promote a CBC-sponsored jobs resolution (H. Res 348) calling for a comprehensive national initiative to create jobs in struggling communities. The resolution was introduced in the U.S. House of Representatives in July. The resolution has yet to come to the floor. The Black Caucus says it has proposed more than 40 job-related bills to help alleviate elevated unemployment rates in black and urban communities.

Many people waited in line the night before the event dressed in pumps and business suits for the opportunity to beat the crowd.

A particularly warm day in Atlanta, over twenty people were treated for heat exhaustion from the wait in line among an estimated 5,000 people.

Don’t miss your opportunity, the next stops include:

Good luck to all of those who attended the job fair and keep your faith to those that are STILL looking.

Is this tour an appropriate way to bring attention to the joblessness rate of African-Americans? What needs to be done?