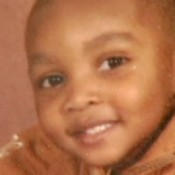 A Chicago woman is currently mourning the loss of her son after a domestic dispute turned violent.

3-year-old Jaivon Sandifer was stabbed multiple times and had several incise wounds after his father, Gregory D. Sandifer, got into an argument with his mother.

Sandifer also allegedly sexually assaulted his girlfriend before he stabbed her with his knife as well. The unidentified woman had multiple stab wounds on her chest, neck and arms.

She was also hit with a television and pushed out of her second story window.

The victim is now listed in critical condition.

Police arrived on the scene and tried to pursure Sandifer when he jumped out of the window and fled on foot.

His Spider-man attempt was throttled however – when he broke his ankle on the way down from the window.

Sandifer is being held without bond.

Domestic violence is never okay. I’m hoping if any of you know of family and friends in violent situations that you get them help before it’s too late.

Have you ever had to help someone you’re close to deal with a violent relationship partner?