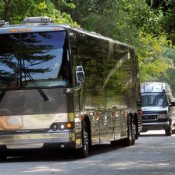 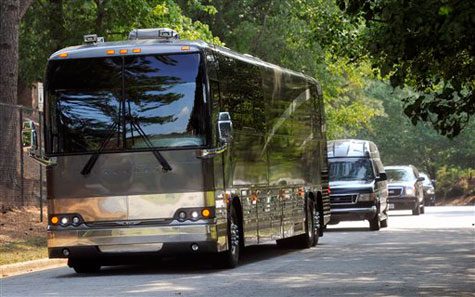 Luxury Bus Was Root of the Problem

After being free for just ONE day, Atlanta rapper T.I. – real name Clifford Harris is back in federal custody.

The Grammy-award winning rapper checked into a federal penitentiary in Atlanta last night.

According to T.I.’s lawyer, Steve Sadow, he’s back in federal custody because of an issue involving his trip from the Arkansas prison to his Atlanta halfway house on a luxury bus on Wednesday.
Prisoners must choose a low-key method of transportation from prison to the halfway house and T.I.’s pimped out tour bus is far from low-key. He had to get approved for a transfer to use his own transportation and indicated that he would be taking a van.

Prison officials are steaming because he mislead them about his mode of transportation. T.I. was sentenced to 11 months for a probation violation last October but was released early and had planned to finish out the rest of his sentence in a half-way house.

Seems like the prison wardens must have too much free time on their hands.

I’m hoping that this issue can be resolved and T.I. will continue on as planned.

Seems like T.I. showed up in a tour bus and several cars full of a camera crew and papparazzi for his upcoming reality show and that type of publicity is a security breach for other inmates housed at the facility. He is being held in custody until they’re able to move him to a new halfway house.