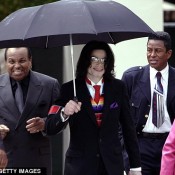 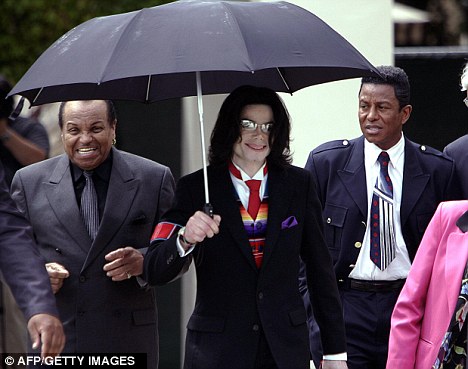 Escape route: Michael Jackson, with brother Jermaine on the right and father Joe, left, at his child molestation trial in 2005.

Family Planned To Send The Pop Icon To Bahrain

The Jackson family protects their own.

Jermaine Jackson says his family had secretly arranged to fly Michael to Bahrain if the pop icon was found guilty of child molestation.

Jermaine was quoted as telling The Times magazine out Saturday that a private jet financed by a friend was on standby to whisk his late brother to the Gulf emirate if the 2005 court case ended with a conviction.

Bahrain does not have an extradition treaty with the U.S.

Jermaine says his brother did not know about the escape plan but Michael would have “done it in a heartbeat” because “why should he go to jail for something he didn’t do?”

In an interview with The Times Magazine, Jermaine said: ‘If they were going to sit and crucify my brother for something that he didn’t do, America deserves us not to come back here.”

“At the end of the day, this is supposed to be the land of the brave, home of the free, democracy, freedom of speech.”

The singer was found not guilty on all charges.

He later spent a year in the emirate as a guest of a son of Bahrain’s king.

I hope none of you get any ideas about going to Bahrain.

Can you imagine the HOOPLA that would have ensued if Michael Jackson would have fled the country?