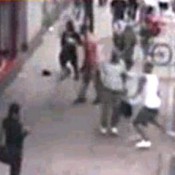 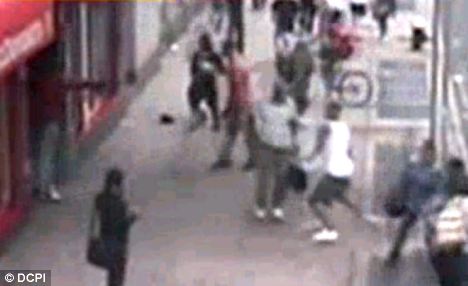 Police in Brooklyn are searching for three suspects in a brutal shooting at a neighborhood McDonalds on Nostrand Ave. in the Flatlands.

Images show 18-year-old Tyquan Sewall, who lives just blocks from the McDonald’s and nearby Brooklyn College, being shot at point-blank range.

The first bullet grazed the left side of the victim’s head, sending him staggering backwards.

He was then hit three more times and sent rolling out into the street, passing through at least two lanes of traffic.

Terrified onlookers fled in panic as the shots rang out outside the busy restaurant chain.

The weapon used was a .32-caliber Smith & Wesson. The man who fired the gun was wearing a bright red jacket.

Two of the men then ran over and snatched the white shoes Mr Sewall had been wearing before making off as police arrive.

The shooting took place in Flatlands at around 3pm on Tuesday. The victim was hit in the chest, groin and leg and is now in a critical condition in hospital.

The senseless violence has to STOP! I’m wondering what these boys were arguing over? I hope the police are able to apprehend the suspects and bring them to justice.

What type of times are we living in when stuff like this happens in BROAD DAYLIGHT?

What can be done to educate the youth against violence?