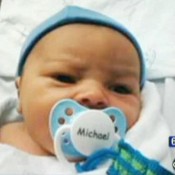 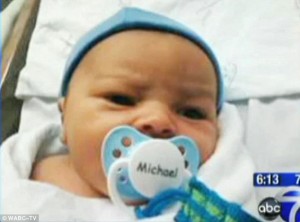 The one-month-old son of a TV reporter died after the babysitter collapsed on top of him and likely suffocated him.

Michael Baldwin II, who hosts Diverse Long Island and works at News 12, said he was called into work last week at the last minute and asked Teresa Coffey, 39, who he said had been eager to watch his son.

But the decision ended in double tragedy after both the baby Michael Baldwin III and Ms. Coffey were later found dead at his home.

Mr Baldwin, from New York, told Newsday: ‘This kid has been my life. And now, my boy is gone.’

Ms. Coffey was a friend of his wife. After their baby was released from hospital – after suffering from medical complications at birth – she offered to babysit.

Mr Baldwin said he got a message from the 39-year-old at work saying she needed to talk to him and could hear the baby in the background crying.

After calling back ‘dozens of times’ with no response, he returned home to find Ms Coffey ‘slumped over’ in the living room, but couldn’t find his son.

After looking everywhere he went over to Ms Coffey and tried shaking her. It was then that he discovered the baby underneath her, not breathing.

While they are still trying to put together what happened, police do not believe carbon monoxide was a factor in their deaths.

An autopsy will determine the exact cause of deaths.

Mr Baldwin said he and his wife had only recently returned home with the newborn, the baby spent weeks in the hospital for a medical condition.

News 12 released a statement on Friday, saying: ‘Our thoughts and sympathies are with the Baldwin family during this difficult time.’

My prayers go out to this family during this difficult time.

Have you ever had a strange mishap with a babysitter?