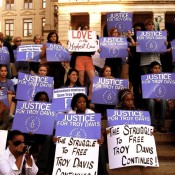 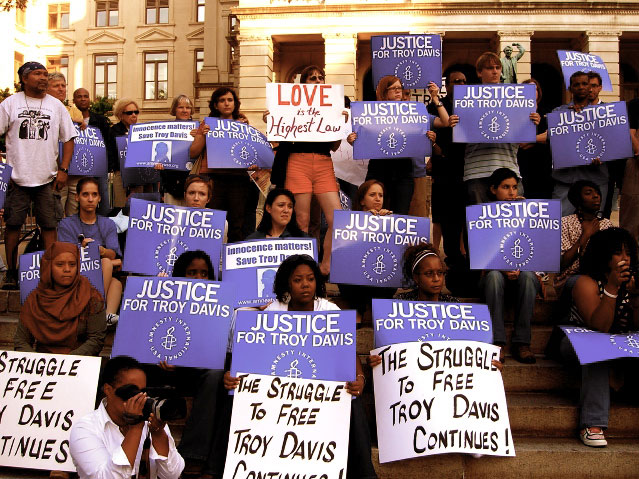 Despite last ditch efforts to save his life, it looks like the state of Georgia will go ahead with Troy Davis‘ execution as planned.

According to prison policies, Davis was put on “death watch” days ago, with an officer assigned to watch him at all times to ensure he does not try to take his own life.

Anonymous members of the prison’s execution team have rehearsed their respective roles. Today, officers — even those not directly assigned to the execution — will remove any badges or patches that identify them. .

Davis and his family will have six hours together — 9 a.m. until 3 p.m. — in a special visitation room before they say “good-bye.”

After his family leaves the prison for the last time, that is when officials begin the final preparations for his death.

Davis will get a physical and clean clothes at 3 p.m., and an hour later his final meal. Davis has asked to have the same thing for dinner that the rest of the 2,100 inmates will have Wednesday – a cheeseburger, potatoes, baked beans, slaw, cookies and a grape drink.

At 5 p.m. Davis can make a recorded final statement, one that is longer than the one he can make once he is strapped to the gurney in the death chamber.

He will be allowed to pass the time listening to music, reading, watching television and talking on the telephone. And all the while a prison guard will take meticulous notes of everything he does, how much he eats or doesn’t eat and his mood.

An hour before he is scheduled to die, Davis will be offered a sedative to calm him.

That also is the time when five reporters will be loaded into a van and driven to the prison where they will wait, down the hall from other witnesses, until they are taken to the death chamber behind the massive prison.

One by one, they will be led into the view area – first the witnesses for the state, then Davis’ witness and finally the media witnesses.

Mark MacPhail Jr. and his uncle, William MacPhail, will be in the death chamber to represent the family. Mark MacPhail said his older sister’s emotions wouldn’t let her witness the execution and his mother and grandmother didn’t want to watch. “I was the only family member willing to,” said the 22-year-old.

Once the witnesses are seated, Davis will be placed in view with IVs in both arms. The warden will read the death warrant and Davis will be offered a chance for final words. The lethal injection process will begin, injecting a cocktail of drugs in Davis that will kill him within minutes.

Also despite the efforts of celebs such as P. Diddy, Russel Simmons, Al Sharpton, Toure and others on Twitter. The social network has blocked trending topics dedicated to the cause. What angers me is that Casey Anthony’s case wasn’t CENSORED. So what’s the difference?

It’s also been reported that Troy has refused his last meal and even offered to take a polygraph test – he was denied.

Prayers go out to the family of Troy Davis.

Do you believe in the death penalty? Why or why not?