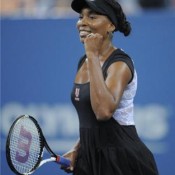 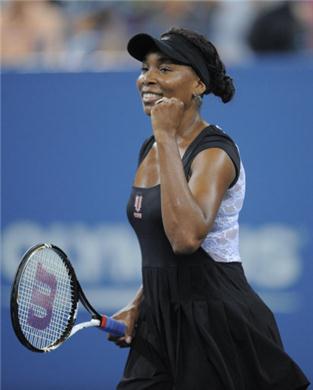 Venus Williams at the U.S. Open.

The autoimmune disease causes extreme fatigue and joint pain. There is no known cure for the condition, but it is rarely life-threatening.

The surprising announcement came before her scheduled second-round match against 22nd-seeded Sabine Lisicki.

“I enjoyed playing my first match here and wish I could continue, but right now I am unable to,” the seven-time Grand Slam champion said in a printed release.

“I am thankful I finally have a diagnosis and now focused on getting better and returning to the court soon.”

Sjogren’s Syndrome is a chronic disorder that causes insufficient moisture production in certain glands of the body, according to webmd.com.

As many as four million Americans have the disease. It occurs when a person’s normally protective immune system attacks and destroys moisture-producing glands, including salivary glands and tear glands. The lungs, bowel, and other organs also are occasionally affected.

There is no cure, but it can be treated and controlled, with the goal to decrease discomfort and reduce the harmful effects of dryness.

So happy that this is a disease that can be managed with care. I’m praying for a speedy recovery for Venus! We need her back out on the courts.