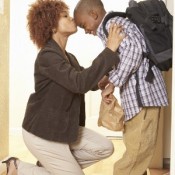 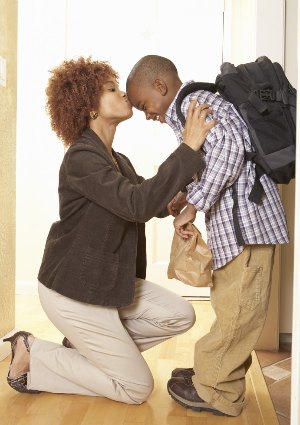 Let’s face it – raising a son as a single woman is hard. We’ve found several tips to help you along that path.

Make him “earn” his keep.

Let’s face it, you’re probably going to do most of the heavy housework but you’re not doing your boy any favors in the long run by leaving him completely out of it. Even something as simple as holding the dustpan works to include younger boys and as he gets older, take your pick of “man” chores he can be responsible for.  Not only is tandem housework great bonding time but it reinforces your child’s ideas about partnership in the home and working for his living.

You’re always going to be around for the easy choices–what to eat, when to go to bed, what to wear to school. Sometimes it’s quicker for you to decide for him but much harder choices await him in the not-so-distant future and beyond. Should his first brushes with making decisions that impact his life be the tough choices like smoking, going for a joyride with friends or worse? Men don’t make good choices in life by accident–they need practice. Pick two options you are okay with and let your boy decide on one that’s good for him. The more practice he gets making good decisions under your watchful eye, the easier it will be to make the right choice when you’re not around.

You have to have your act together when you’re responsible for another life form, even if it has four legs or a set of fins. Dog-walking is especially useful in man training since a dog must be lead by a strong and authoritative figure allowing your boys inner-man to rise to the occasion out of necessity.

No one prefers a broke brother. The road to long-term wealth and financial health is paved with the ideas he is forming about the value of a dollar right now. It’s surprising how much cash children get from friends, family and sometimes perfect strangers, only to blow it all on candy and chips at the corner bodega. It may be too early to be thinking about his retirement but not saving a lil’ something for a rainy day. Short-term savings goals are effective and fun. If he want’s an Xbox kinect, hold out until he can hold on to half the cost then you can put in the other half.