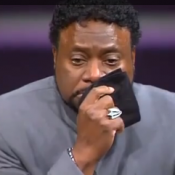 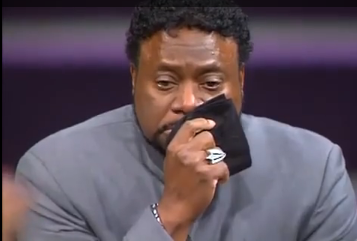 Just when we thought it was over…

Bishop Eddie Long is not playing! He wants his settlement money back..from three of his five accusers who decided to speak out.

Two of the young men Spencer Legrande and Jamal Parris, are collaborating on a tell-all book, while a third – Centino Kemp, has also decided to tell his story.

Five young men accused the Bishop of using church funds to coerce them into sexual relationships once they reached the age of consent.

The letter, sent this week by the Atlanta law firm Drew Eckl & Farnham, alleges that Jamal Parris, Spencer LeGrande and Centino Kemp violated terms of a confidentiality agreement outlined in the settlement with Long and New Birth Missionary Baptist Church.  The firm is seeking at least $900,000 already paid the three accusers, according to people involved in the settlement but not authorized to speak publicly. That figure is a portion of the total settlement with the three men.

Financial terms of that settlement have not been disclosed but, based on the letter and the fact each of the young men were paid equitably, the total comes to at least $1.5 million.

The letter outlines the plaintiffs’ “demand for arbitration” though no legal documents have yet been filed.

Legrande doesn’t care about the money…he just wants his voice to be heard. In an interview with the AJC he said,

“I’m going to tell the world – money does not buy happiness,” LeGrande said in August. “When you sleep at night, the problems are still there. The money stuff, who cares about the number.”

This story just continues to hit us with so many twists and turns.

The Bishop still denies the claims made by his five accusers.

Do you think that the young men should return the settlement money?