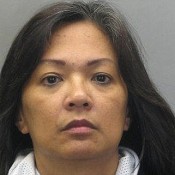 Woman Sentenced To 35 Years In Prison

Dela Rosa was upset that her son-in-law, James Ogdoc, had impregnated her daughter out of wedlock, prosecutors said – the couple married shortly before Angelyn was born.

The jury rejected the woman’s insanity defence, finding her guilty after a two-week trial and more than five hours of deliberations. She was sentenced to 35 years in prison. ‘It hurts to watch other children in her neighbourhood boarding a school bus knowing that Angelyn will never get that opportunity.’

A family feud should NEVER be that serious!

How do you deal with your in-laws? What’s the worst thing that they’ve done to you?