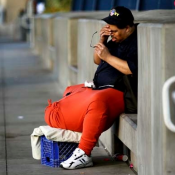 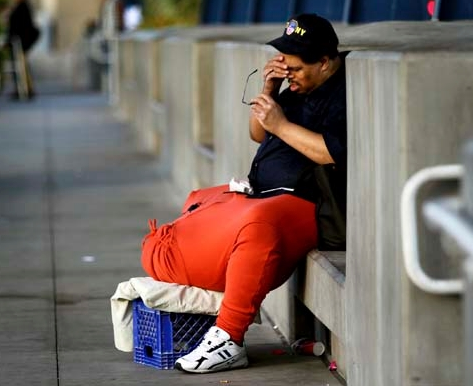 If you’ve ever heard the expression “grow a pair,” I don’t think you’ll be using it again after reading this story.

Your first glance at Wesley Warren is often a cause for a double-take – when you notice the extremely large mass hanging from the front of his pants.

It’s his scrotum, the protective sack of skin that guards the testicles.

The 47-year-old has watched his scrotum grow from a normal size, to the size of a tennis ball, to its now current 100-pound mass – after an injury that occurred while he was asleep.

“I never felt such pain,” he said. “It was like a shooting pain through my entire body. When it stopped, it was like a huge tractor trailer went off the top of me. I think it ruined my lymph nodes down there.”

Warren hardly ever leaves his house because it takes him about 3 hours just to get to the post office.

He often has to stop and rest, and lifts the 100-pound mass atop a pillow on a plastic crate to relax.

He deals with daily bouts of depression and longs for a normal life, but he’s currently unable to afford the $1 million dollar surgery that would return his scrotum to a normal size.

“I want to have real friends and a relationship with a woman, “Warren explained.

Although he thinks that many others would have at least attempted suicide he’s trying his best to remain optimistic, “But I’m not suicidal. I’m too strong for that.”

In an effort to raise awareness and funds for the surgery, Warren recently appeared on Howard Stern’s national satellite radio and cable TV freak segment.

“I don’t like being a freak, who would?” Warren said.

Whew. That’s alot to handle and I hope this man is able to raise the money that he needs and receive therapy from a license psychiatrist.

Best of luck to him!

You can contact Warren through his email [email protected]

Do you think that Wesley Warren should ask donors to raise the money?