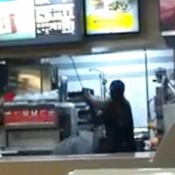 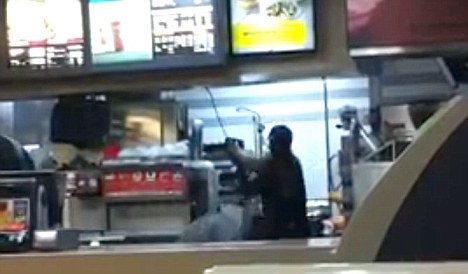 Worker Was Furious At Heckling

Remind me to never visit a McDonald’s in New York City.

Yet another one of the fast-food restaurants is hit with an act of violence.

Suspect Rayon McIntosh is allegedly seen on video grabbing a metal rod from the back of a Manhattan McDonald’s and using it to viciously beat two female customers.

Just before the attack, the women appear to provoke the cashier, swearing at him and getting behind the counter, after he questions a $50 note they have given him. After beginning the assault, his stunned colleagues try in vain to restrain him. McIntosh, who is said to have spent a decade in jail after shooting dead a high school classmate in 2000, was arrested and charged with two counts of assault and criminal possession of a weapon. He is being held in police custody on $25,000 bail.

I’m trying to figure out why people become so enraged with fast-food service? Learning to control your anger is a great way to improve your daily interactions with yourself and others. Yes, you shouldn’t expect horrible service…BUT you can’t go into McDonald’s expecting five-star restaurant treatment.

You most definitely get what you pay for.

What’s the worst experience you’ve had at a fast-food restaurant?