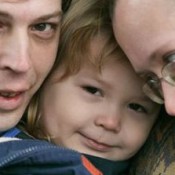 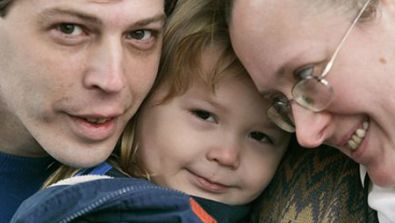 A white couple lost custody of their three children after they were removed from the home on abuse allegations.

“Actually, the judge and DYFS told us that there was no evidence of abuse and that it was the names. They were taken over the children’s names,” father Heath Campbell told NBC 10 Tuesday.

In protest, Heath and Deborah Campbell  picketed with three other people outside of child services offices in Flemington, N.J., Tuesday, saying that the state has no right to keep their children away from them now that the court allegedly ruled that the kids were taken away without cause

The case originated after the local ShopRite refused to decorate a birthday cake for the son, Adolf Hitler Campbell, and reported the incident. Adolf and siblings JoyceLynn Aryan Nation and Honszlynn Hinler Jeannie have been in foster care since then.

In January 2009, the Campbells told MyFoxPhilly that Adolf Hitler Campbell is just like any other 3-year-old boy.

“It’s not like he’s growing up to be a killer or nothing like that,” Deborah Campbell said.

“I went to just to get a cake… it was a circus of racism,” Heath Campbell added.

I’m trying to understand why they would name their child after a neo-nazi mass murderer?

What kind of people want their child growing up named after a man who killed millions of people?

Should the Campbell’s get their children back?