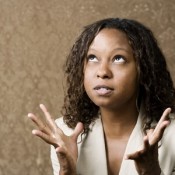 Let’s face it – we all need advice about our love lives every know and then. However, knowing where to go for advice is just as important as the people that you chose to share your bed with. Some friends are great at dishing out advice and some are…well they shouldn’t quit their day jobs to become relationship experts.

There are six type of people you should never try to take relationship advice from…matter fact just avoid discussing your love life with them at all.

1. The friend who judges

Sometimes full disclosure about our relationships is embarrassing. We all have that friend, who we fear sharing all the details with for fear of her judgment. So instead of telling her how bad things really are, you share only half the story and take her half advice. You take it because you want to believe your relationship doesn’t have all the flaws it really does. You want to live in la la land with this friend who doesn’t know your man is verbally abusive, controlling, unfaithful…whatever it may be.

2. Your friend who settled

…for less than she should have. I assume whoever is reading this is a strong-minded woman who is out there testing the waters, and wouldn’t just settle down with someone for the sake of settling down. But, you have friends who have settled. You have a friend who has been dating the same guy since high school. She doesn’t know a thing about dating. She honestly doesn’t expect all that much from her relationship because she never saw what else was out there—and that it could get better. Don’t talk to her. She is just going to tell you that “every relationship has its problems” as she folds the underwear of her boyfriend who hasn’t taken her on an actual date in years and who she quit her job to move cross country for.

Come on. Do I even have to say this one? Unless it’s an ex from a LONG time ago—one who you are strictly platonic with and actually vomit at the thought of sleeping with—then the only reason you’re talking to this guy right now is to have your ego stroked. You want someone who you’re attracted to to tell you that you deserve so much better than this. But you’re not getting any honest, unbiased advice out of him. Stop wasting your time, find other ways to boost your confidence, and talk to someone who doesn’t have selfish intentions.

Sadly some people care more what their friends think about them, than the well being of their friends. If you have a friend who always tells you what you want to hear…that’s probably not just a coincidence. She doesn’t just happen to always be on the same wavelength as you. In fact, she has probably many, many times thought you were making a huge mistake, but told you to “go for it!” Because she knew it was what you wanted to hear. Don’t talk to her about this.

Can you think of any more people that we can add to this list?