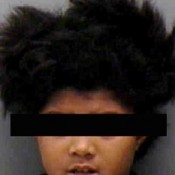 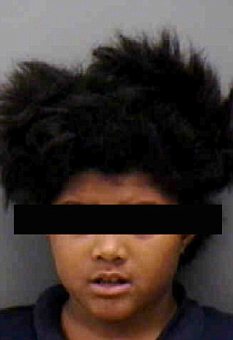 Okay so something was definitely in her Halloween candy…

A Florida bus driver called police after a 9-year-old girl went into rage – because he told her to stop eating candy on the bus.

The sheriff’s office said the girl jumped off the bus after spitting and cursing at the driver and allegedly threatening to hit other children. She then began throwing pieces of asphalt at the bus, hitting the windshield next to the driver.

As the deputy approached, he saw the girl throwing the asphalt while shouting at the driver: ‘Shut the f*ck up! I will f*cking kill you!’

Authorities said the girl walked away when she saw the deputy.

But when she realized the deputy was following her, she picked up a metal chair in a nearby yard and threw it at him. As the deputy informed her that she was under arrest, the girl resisted by wildly kicking and trying to push him.

The girl, who tried to bite the officer as she was taken into custody, was booked into the Lee County Jail.

She has been charged with

I hope that she gets a psych evaluation and they can get to the bottom of her rage. That’s not an acceptable reaction for a child her age.

Do you think that the authorities should have charged her with felonies?