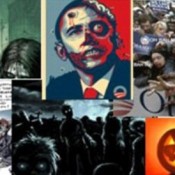 This is the photo depicting President Obama as a zombie with a bullent wound.

When will people stop disrespecting our President?

I’ve never seen a man in the highest office in the land treated with so much blatant disregard for his position.

First there was the Obama Chia Pet, then the birther movement, the Obama baby doll and the list goes on.

But now I think the Republican Party has really crossed the line – they’ve depicted President Obama as a zombie with a bullet in his head.

Where’s the secret service when you need them?

The depiction of President Obama as a “zombie” with a bullet hole in his forehead was part of the illustration in email sent to members of the Loudoun County Republican committee asking them to help decorate a float for the Halloween parade in Leesburg.

Virginia Governor Bob McDonald called on the Loudoun GOP to “apologize for their actions, and to immediately ensure that such imagery is never used again.”

Virginia GOP Chairman Pat Mullins said the image “has no place in our politics. Ever.”

Even before the last float made its way down King Street Mark Sell, chairman of the Loudoun County Republican Committee issued a statement saying the depiction of the President

“represented a light-hearted attempt to inject satire humor into the Halloween holiday. Apparently, some individuals have interpreted an image of Barack Obama that appeared within the email as intending to portray the President as a victim of a violent crime. Nothing could be further from the truth, and we deeply and sincerely apologize to the President and anyone who viewed the image if that was the impression that was left.”

Why do you think our current President is so often disrespected by those who use to hold his position in such high esteem?