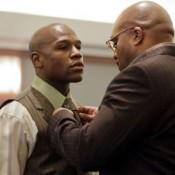 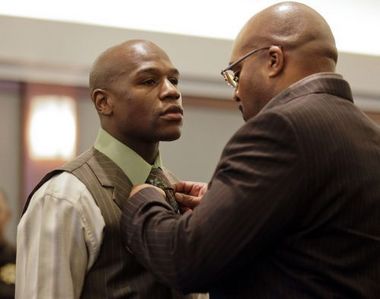 AP Photo Floyd Mayweather, left, has his tie adjusted by adviser Leonard Ellerbe before being sentenced to three months in jail Wednesday.

Boxer Floyd Mayweather Jr. isn’t a stranger to getting in trouble with the law.

After dodging jail time in most of the above cases he finally lost his courtroom winning streak.
A Las Vegas judge sentenced the championship boxer to 90 days in jail; after he pleaded guilty to a reduced battery charge and no contest to two harassment charges.
He was charged after a hair-pulling, punching and arm-twisting argument with his ex-girlfriend Josie Harris – while two of their children watched in September 2010.

According to an arrest report, Mayweather had threatened Ms Harris, saying: “I’m going to kill you and the man you are messing around with.”

After all these cases I’m glad that someone is finally standing up to Mr. Mayweather. He can’t keep thinking that he’s invincible from the law.

Do you think this was an appropriate punishment?