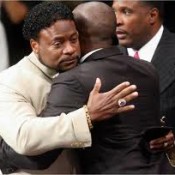 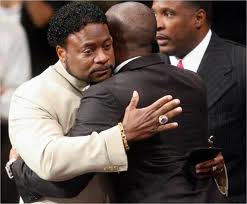 The Bishop Plans To “Heal” His Family

This is becoming a game of Dominoes.

Bishop Eddie Long made a big announcement to his congregation Sunday. He told his New Birth Missionary Baptist Church family that he was taking a sabbatical from ministry.

“I’m still your pastor. You’ll still receive my direction,” Long said Sunday. “You’ve given me some weeks to take care of some family business.”

Long appeared with two of his children standing by his side and insisted that he’s “stepped up and hasn’t stepped down.”

The Bishop’s wife, Vanessa Long, filed for divorce on Thursday after 21 years of marriage. It’s been rumored that the couple has been separated since July.

Although Vanessa was by his side when allegations that he coerced four young men into sexual acts, by giving them money and gifts first broke; she has since been rarely seen in the public eye.

She changed her mind three times on Friday before deciding to ultimately proceed with the divorce.