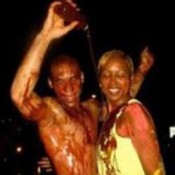 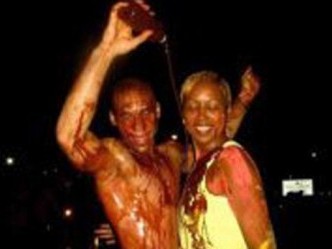 Sharon Smalls in the offending picture.

Have you ever seen your child’s school principal in a compromising position? What would happen if you did?

Parents at one New York City high school are grappling with this ordeal now.

Sharron Smalls, principal of New York’s Jane Addams High School, is pictured next to a topless man as he pours a dark liquid substance over her.

Students were caught passing a copy of the photo around last week.

The school is in danger of being shut down and received an “F” grade from the city.

Smalls is already under fire for allegations of credit padding. A New York City Department of Education probe is looking into whether she gave students credits for classes they didn’t take.

Seems like this principal doesn’t have her priorities in order. She needs to be more concerned on what’s happening at her school, not on raunchy party pictures.

Some professions require you to keep a certain prestige off the job and your private life is not necessarily private, if that’s not what you signed up – change positions.