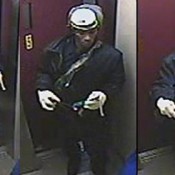 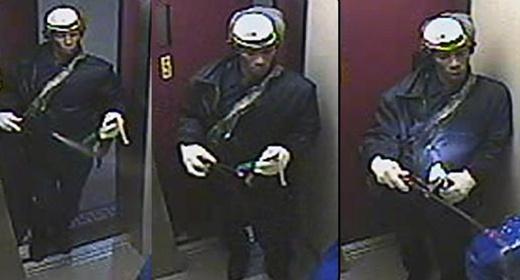 Jerome Issac with the deadly weapons.

An elderly New York City woman was torched to death by her former employee because she owed him $2,000.

Jerome Isaac, 47, was charged with first-degree murder and arson in the horrific death of 76-year-old Delores Gillespie, who’d hired Isaac to do odd jobs but fired him after she caught him stealing, her nephew said today.

Cops said Isaac ambushed the elderly woman inside an elevator yesterday afternoon, doused her with a flammable liquid and set her on fire with a Molotov cocktail, killing her.

He was holding two terrifying murder weapons — an exterminator-style spray can filled with flammable liquid and a bottle gas-bomb.

Before Gillespie could even step out of the elevator, the fiend, wearing a dust mask atop his head, doused her with the accelerant.

The suspect, dressed all in black except for white gloves and the white mask atop his head, stepped out of the elevator and lit the explosive.

The killer opened the elevator door again and threw the Molotov onto Gillespie, setting her on fire.

But the vicious sicko wasn’t done. He opened the elevator door a final time to spray more accelerant on the burning woman before fleeing.

This story is sickening and I’m hoping that they persecute Issac to the full extent of the law.

Have you ever had an employee who went berserk over a business transaction? How did you handle the situation?