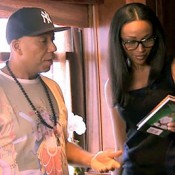 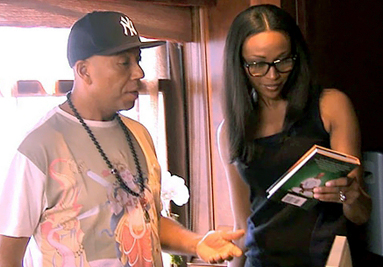 Yawn. This episode of The Real Housewives of Atlanta was just a tad bit..dry. All of the ladies were off doing their own things, which makes for less drama.

Alas, I’ll still give you my top 5 moments from episode 6 in season 4.

Kandi and her mother seemed to get over the stripper hump from Kandi’s 35th birthday party because they were back to being homegirls on this episode. Kandi styled her mother for a photo shoot so that Mama Joyce could find her a man, online.

Cynthia finally went back to New York City, the place where she lived most of her life. Being back in the city she visited her ex-boyfriend, mogul Russell Simmons, who offered her career advice and told her she still had it.

She also met with her slimmer best-friend and celebrity stylist Kithe Brewster who got her to admit she just wasn’t happy in Atlanta.

I’m wondering what that means for Peter and Cynthia’s marriage?

NeNe also went to New York to take care of some business ventures. She met with Famous Famiglia owner, John Kolaj, who wooed her with Chrisitian Loubotin heels, a serendade and a Tiffany’s pen. Kolaj told her the pen was to sign her first million-dollar deal, I’m not sure about the rest of the stuff.

We finally got to see Phaedra outside of her office. The powerhouse attorney met with a client and we got to see her inside a courtroom. The case was fairly smooth because Phaedra knew the judge.
“I always say a mediocre laywer knows the law, a good lawyer knows the opposing counsel and a great lawyer knows the judge,”  said Parks.

A huge side eye to her late, lying, marijuana smoking client paying her in cash – from his glove compartment.

This episode was special for Kim and Kroy, because we finally got to meet their son. Kroy Jagger Biermann was born at 8lbs even and although cameras weren’t in the delivery room, we definitely heard Kim cursing up a storm.

What were your favorite moments from this episode?