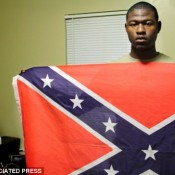 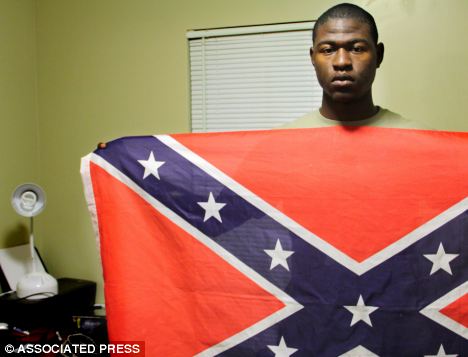 So much for the Civil Rights Movement…

Byron Thomas, a 19-year-old student at the University of South Carolina-Beaufort is a fan of the Confederate flag. So much so that he hangs it with pride in his dorm window…but get this…he’s black.

In an interview, Thomas said a class research project made him come to the belief that the flag’s real meaning has been hijacked by racists groups.

Thomas doesn’t believe that the flag is racist and wants people to see past its past.

‘When I look at this flag, I don’t see racism. I see respect, Southern pride,’ he said.

‘This flag was seen as a communication symbol’ during the Civil War.

Only about two-dozen students have complained about the flag said University spokeswoman Candace Brasseur.

The school had sent an e-mail to its students and staff, informing them that officials had asked Thomas to remove the flag ‘out of respect for his fellow students’ concerns’.

The email went on to say that because of “USCB’s firm belief in the First Amendment and its right of free speech, the University cannot and will not prohibit these flags or other symbols that our students choose to display.”

Somebody needs to show this boy some footage of KKK marches, cross-burnings, lynchings and other symbolic means that white supremacists used to intimidate blacks.

He just can’t be serious…smh.

Do you believe in his reasoning? Or does he need a reality check?