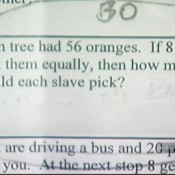 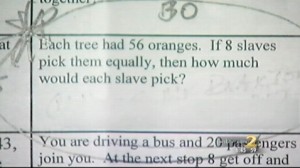 Students were issued a test with the following questions:

“Each tree had 56 oranges. If 8 slaves pick them equally, then how much would each slave pick?” and

“If Frederick got two beatings per day, how many beatings did he get in 1 week?”

If your child were asked these questions on a school test how would you feel?

“It kind of blew me away,” Christopher Braxton, the father of a Beaver Ridge student, told Channel 2. “I was furious. … Something like this shouldn’t be embedded into a kid of the third, fourth, fifth, any grade.”

The offending questions failed to cross the usual review methods.

Under district policy, the worksheet should have been reviewed before being handed out to students, but that process was not followed in this situation. District officials said they would work with math teachers to come up with more appropriate questions.

“Clearly, they did not do as good of a job as they should have done,” district spokeswoman Sloan Roach said.

Roach said the school’s principal, Jose DeJesus, was collecting the assignments so they wouldn’t be circulated. She said the teachers were not intentionally trying to offend the students with the questions.

“It was just a poorly written question,” Roach said.

Many parents are calling for the school to issue an apology. I think it’s time for teachers to undergo sensitivity and diversity training. This kind of overtly racial insensitivity is disturbing and needs to be stopped.

Do you think the test questions were offensive?