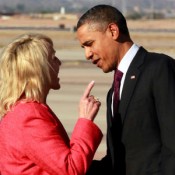 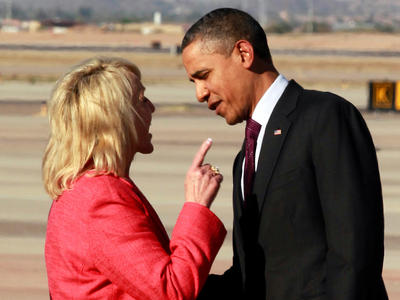 The blatant disrespect President Obama faces is rampant, it’s like a virus infecting many decision-making members of our political parties (most notably Republican).

Fresh on the campaign trail after giving a rousing State of the Union address, Mr. President is on a tour of key battleground states.

He hopped off his tarmac and proceeded to greet Arizona Governor Jan Brewer, when she handed him a handwritten letter asking for a meeting.

Now, President Obama didn’t take to kindly to that because Brewer had previously slammed their last White House meeting in her book, Scorpions At Breakfast.

He told her that their last meeting was inaccurately depicted in the book and proceeded to walk away, when Brewer stuck her finger in his face.

The pair disagree on the 2010 Arizona immigration law that allows anyone suspected of being an illegal immigrant to be detained.

The picture speaks a thousand words.

Why is it so hard for people who disagree with the President… to give him the respect that the highest office in the land demands?

I’m just not buying that she’d stick her finger in another elected officials face over a disagreement.

The fact that you would even stick your finger in the face of the President of the United States is just….

“I felt a little bit threatened, if you will, in the attitude that he had, because I was there to welcome him,” said Governor Brewer.

THREATENED, by our President. SMH.

We still have so far to go.

Do you think Gov. Brewer crossed the line?