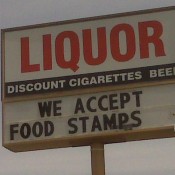 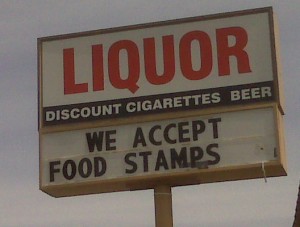 The more you know…

Who knew that you could use your food stamp in the strip club? Apparently a lot of people knew, because Congress has set a law in motion to ban the use of the government assistance at strip clubs, liquor stores and the casino.

Republicans are proposing the bill to prevent misuse of government funds.

By a 395-27 vote, the House approved legislation that would prevent welfare recipients from accessing their payments in strip clubs, casinos and liquor stores, a proposal Republicans back as a way to reduce waste and abuse of federal payments.

Republicans called up the bill under a suspension of House rules, which required a two-thirds majority vote. While some Democrats grumbled that the bill demeans people who need help, others indicated support for the bill as a common-sense way to reduce waste and ensure that payments go to help families.

The bill, H.R. 3567, was opposed by just one Republican and only 26 Democrats, making it easy for Republicans to reach the two-thirds majority.

Seriously, this must be a major problem if Congress feels the need to act. I’m just wondering how many people spend their food benefits at these entertainment venues.

Do you think a bill like this is needed?